'Triathlon' in quotation marks because it was all indoors and transition time didn't count. But it was three workouts in a day, so I'll count it as my first triathlon.

My favorite running store Jack Rabbit puts on an Indoor Triathlon series over the winter to help serious triathletes stay in shape and to help non-serious athletes, like me, see what it's like to do a triathlon. The triathlon consists of 10 minutes of swimming, 30 minutes of biking, and 20 minutes of running. The goal is to go the furthest distance in each sport. Participants are scored on a curve for each sport- the person who goes the furthest gets a score of 100, and shortest distance gets a 1, and everyone else falls into the range.

I was a little nervous going into the race... for a variety of reasons. First, the swim. I got GREAT at swimming last summer when it was all I could do, but since then, I've fallen off the wagon. I think swimming is the hardest part about a triathlon, and it's the first event. And second, the run. I'm still pretty cautious (and still in physical therapy) about my running abilities, and I didn't want to risk refracturing my pelvis for a 'race' I wasn't serious about.

So here goes-- it was a such a fun time! Everything went much, much better than expected. First up, the swim. It was super tough, especially since the girl next to me (who would end up winning the entire thing) was completely smoking me. So I just focused on keeping my breathing calm and my mind determined to hit my goal: 20 laps. I ended up finishing 21 laps, so I was thrilled. But note to self: increase upper body strength. My arms were dying by the end! I ended up tying for 4th place for swimming the most laps.

Next up, the bike. My least favorite part. Since the goal is to go as far as possible, the strategy is to set the resistance as low as possible and just let it roll. For 30 minutes. Boring as all get out. I started out conservatively, humming along, and thought I was doing pretty well until I noticed the girl beside me cranking it out at over 10mph faster than me... so I kicked it up to match her speed. Boring, but 'easy' compared to the swim. I ended up placing 3rd for the biking portion with 16.31 miles.

And finally, the run. Where I learned I'm much stronger than I think I am, and am still kicking myself for not pushing myself more than I did. I started out at 6.0, and then played around with bumping up the speed every 2 minutes, followed by a minute recovery. But when I hit minute 12 and was cruising at 6.5, I started to psych myself out and pulled back... only to realize at minute 16 that no, I didn't feel any pain, and no, I wasn't doing my best. With only 4 minutes left in the run, I didn't have a lot of time to make any drastic change in my distance. I was aiming for 2.2 miles, but ended up with 2.14. Not thrilled at all, especially because it was a confidence issue, not an injury issue, that held me back.


I ended up placing 4th overall. Not having a 1st place finish in any of the three events really killed me-- I had a better swim and cycle score than the girl who finished 3rd place, but because she got a perfect 100 for her run score, her overall score got boosted something crazy. BOO! I'm not going to dwell on who's the better athlete, but it's kind of disappointing. Something to chase next time...

No comments: Links to this post
Labels: jack rabbit, triathlon

I took advantage of the Cyber Monday 'deal' (gee thanks... a whole $6 off the $220 fee...) and went ahead and registered for the 2014 NYC Marathon. And then I celebrated with a 3 mile, pain-free run... fitting since this will be my 3rd attempt at running this marathon.

No comments: Links to this post
Labels: nyc marathon 2014

The Week In Photos

Serious question: how do bloggers take so many photos of every inane second of their lives? Don't you feel self-conscious and a little silly? Granted, I've never been a big photo taker, but it wasn't until I started reading blogs that I realized just how many pictures other people take.

Long story short... if I only have ~4 pictures of my boyfriend and I (and we've been together for almost 3 years), you probably won't see many original photos on this blog.

That being said, here's a weekly recap with photos stolen from around the web:

1. I got to run on the AlterG Anti-Gravity Treadmill at Finish Line PT. It was my first run back since November 10th, and it felt great. I had been feeling lingering pain for the past few weeks, and I was worried that I had fractured my pelvis again. When I talked to the physical therapist at Finish Line, he assured me that it was very unlikely I had another fracture, and that it was probably a mix of muscular + injury phantom pain. We went through some stretches and he analyzed my gait, which is horrible, and I've been feeling much better ever since. Now to find extra money so I can pay out of pocket for MORE physical therapy sessions...

2.  I turned 28. I was oddly unexcited about this birthday, and hadn't planned anything. I told my boyfriend that I wanted to be surprised, but hinted that I really wanted to see the Hunger Games... which happened to open on my birthday. He's a smart boy and listened, so I found myself at an IMAX theater drinking 'juice box' wine on Friday night. And on Saturday, he surprised me by rounding up my closest girlfriends for a birthday brunch. Perfect birthday.

3. Friendsgiving. This is our 3rd year doing friendsgiving, and each year gets better and better. Everyone really upped their game this year when it came to food- and it's so interesting to hear what other people grew up eating at Thanksgiving! For example, I think my family is the only family in America not to have mac and cheese on Thanksgiving. I stuck with a staple: sweet potatoes. But since I like my sweet potatoes on the savory side (and pass on the marshmellow sweet stuff), I made these: Whipped Bourbon Bacon Sweet Potatoes. Definitely a winner.

4. For the first time since last Christmas, I'm headed home! Although I've seen my family several times over the past year in my home state (Myrtle Beach 1/2 Marathon +  a summer beach week), I haven't been to my actual home since last Christmas. Crazy, right? So excited to sit by the fireplace, hang out with the puppies, and enjoy Thanksgiving! 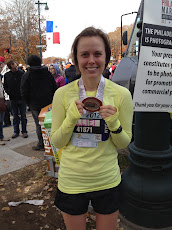 I started this blog after training for the 2012 NYC Marathon and catching the 'marathon bug.' After a pelvis fracture sidelined me AGAIN for the 2013 NYC Marathon, I'm on a mission to make 2014 my year.
And no, Allie isn't a nickname for Allison, Alexandra, or anything else... it's just Allie.